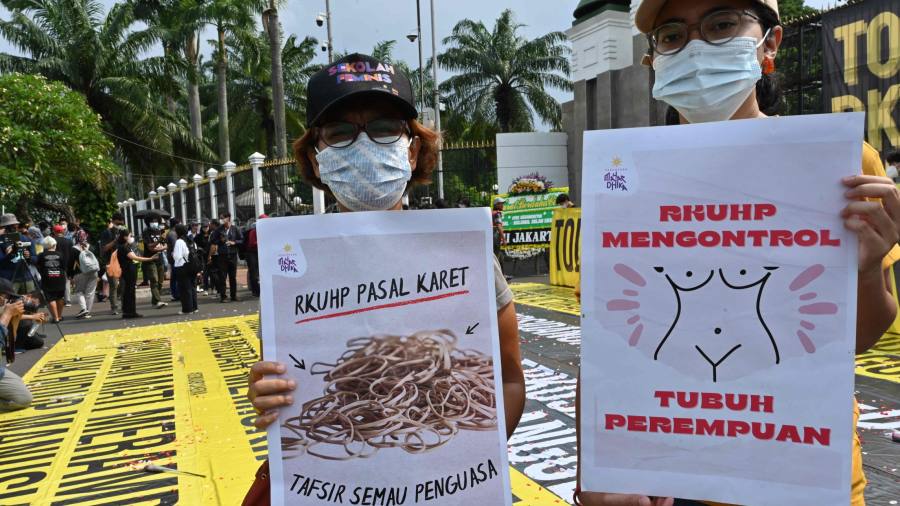 Indonesia has legislated to outlaw insults against the president and sex outside marriage as part of an extensive overhaul of its criminal code.

The revised code, which was approved by the parliament on Tuesday, will apply to both foreigners and locals in the south-east Asian nation, the world’s third-biggest democracy and home to its biggest Muslim population.

Activists, business figures and analysts said the revised code was a setback for human rights and that it threatened Indonesia’s attempts to improve its global reputation and attract more foreign investment for its fast-growing economy.

The sweeping changes include new defamation articles and a bar on insulting the president. Blasphemy and promoting apostasy also become criminal offences.

President Joko Widodo, or “Jokowi” as he is known in his country, in 2019 suspended plans for revision of the code, which is based on Dutch colonial law from 1918, after widespread protests by students and activists against what they said was an infringement of civil rights.

However, there were only a few small protests this week against the revisions, which received less attention than the 2019 proposals.

Andreas Harsono, an Indonesia researcher for Human Rights Watch, said the new legislation could endanger sexual, religious and ethnic minorities and was a “sad day for freedom of expression and press freedom”.

“The problem with this oppressive law is it cannot be broadly enforced,” Harsono said. “It can only be enforced selectively, meaning that it will provide an avenue for extortion. It is a political weapon to jail opponents and creates an atmosphere of fear.”

The revised code criminalises sex outside marriage and cohabitation between unmarried couples, with punishment including fines and prison time. However, any charges must be filed by a parent, spouse or child.

Indonesia’s justice ministry defended the code as protecting the institution of marriage and national values.

The revisions are expected to be implemented over the next three years. Opponents could seek to petition the constitutional court to revoke some of the articles, but analysts said such an effort was unlikely to succeed.

The US ambassador to Indonesia, Sung Kim, said in a speech on Tuesday the new rules could have a “negative impact on the investment climate”.

Other observers argued that Widodo needed to replace the current antiquated criminal code and that an ebbing in the political prominence of more extremist Islamic groups made this a good time to do so.

Kevin O’Rourke, a Jakarta-based analyst and principal at consultancy Reformasi Information Services, said there had been dispute over changes to the criminal code since the 1960s.

“This is actually not as broad as feared in terms of anybody being able to file charges,” O’Rourke said of the criminalising of sex outside marriage. “[The revision] goes against the grain of international trends, but is being denounced by Islamic hardline groups advocating for stricter changes.”