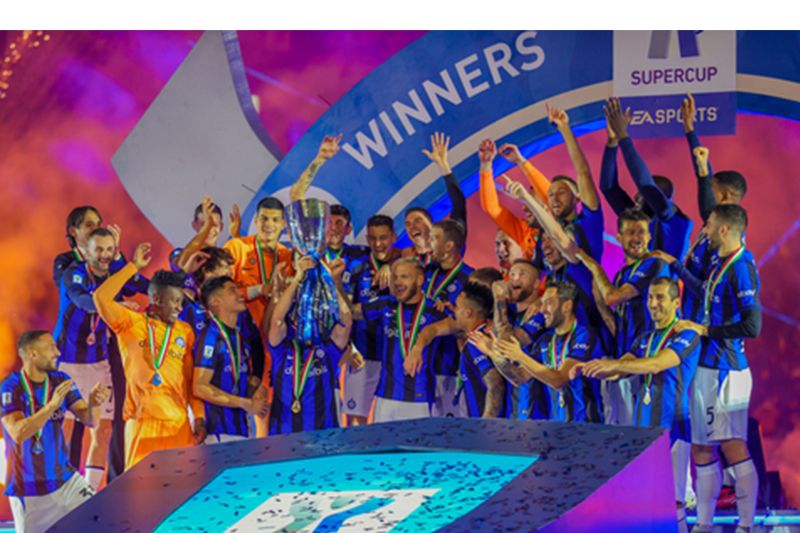 In another international sporting event in Saudi Arabia

Riyadh, Saudi Arabia (ANTARA/Business Wire)- In front of a crowd over 50,000 at King Fahd International Stadium, the Italian cup holders “Inter Milan” defeated the reigning Serie A champions AC Milan 3-0 to lift the third showpiece final to be played in the Kingdom.

His Excellency the Deputy Minister of Sports, Mr. Badr bin Abdulrahman Al-Qadi, and the President of the Italian Football League, Mr. Lorenzo Cassini, crowned Inter Milan yesterday with the Italian Super Cup title. An event which was brought by Ministry of Sport as part of the sporting events in Diriyah’s 2nd Season.

Amidst a large crowd and media presence from various international and local media, “Dimarco” scored the first goal at the beginning of the first half, before “Džeko” fortified Inter’s lead with the second goal. During the second half, “Martínez” scored Inter’s third goal, confirming his team’s victory, and achieving the Super Cup title for the second time in a row, and the seventh in Inter Milan history.

Inter Milan is the third team to be crowned the Italian Super Cup in Saudi Arabia, after Juventus and Lazio who had won the cup in two versions held in Jeddah and Riyadh.

The Kingdom’s hosting of this major event comes as part of international sporting tournaments and events taking place in the 2022 Diriyah Season which are brought by Ministry of Sport, with aim to achieve the goals of the Kingdom’s Vision 2030, and as one of the “Quality of Life” Program’s initiatives, by hosting the most spectacular and largest international sporting events, to ensure a great experience for the visitors of Diriyah Season through amazing activities.